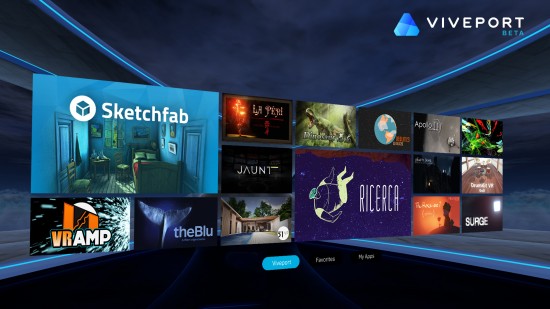 By Rachael Power | 9th August 2016 | VRTech http://www.virtualreality-news.net/
Rachael Power is an editor at TechForge Media, writing about marketing tech, connected cars and virtual reality. She has written for a number of online and print titles including the Irish Times, Irish Examiner, accountingWEB and BusinessZone. Rachael has a passion for digital marketing, journalism, gaming and fitness, and is on Twitter at: @rachpower10.

HTC's launching its own app store for the Vive, the company announced at the VRLA conference recently.

Viveport will eventually roll out around the world, and developers can already register their interest in the store for the beta that will arrive in a few week's time.

It's not yet known if it'll replace Steam but it is an alternative, and Viveport will feature content across new categories for VR, like information, edutainment, social media, 360 video, news, sports, health, travel and shopping.

The upcoming release will also introduce an update to Vive Home.

The aim of Viveport is to offer the most immersive and diverse choice of VR experiences available, with a focus on the global community of developers, HTC said in a blog announcing the store.

The blog also alluded to monetisation features of VR content for developers and new features to support content creation and distribution but it didn't go into a lot of detail.

"The Vive team and our customers cannot wait to see what new experiences will be shared by our partners in the developer community” said Rikard Steiber, senior VP of Viveport at HTC.

According to The Verge, Viveport launched in China earlier this year.