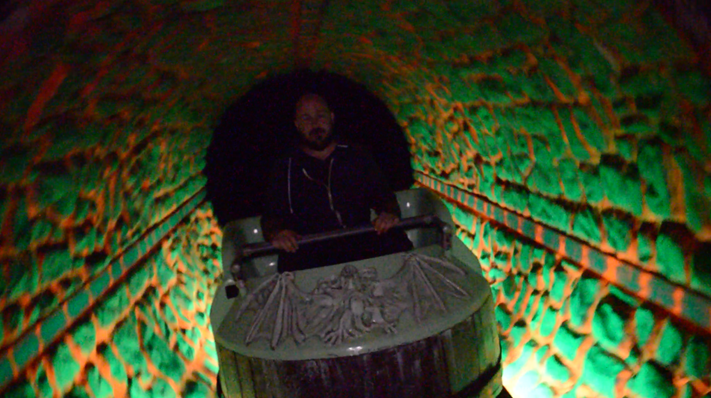 By Joel Zika | 13th June 2016 | Deakin University
Categories: Gaming,
Joel Zika is a Media Artist and Lecturer in Screen at Deakin University, Australia. Along with his artwork -which is exhibited widely in Australia and South East Asia - he has published extensively on Dark Rides, Cinema and Amusement Park Culture. His practice has featured in the recent books : ‘New Romantics – Darkness and Light in Australian Art’ and ‘Digital Light’ edited by Sean Cubitt.

Before cinema took hold of the media landscape of the 20th century, the way we experienced storytelling was very different. Fairgrounds were the main place to experience technology and attractions featured combinations of animatronics, projection, and sound.

These were the early days of virtual reality, taking place at the amusement park in the tunnel of love, ghost train, and haunted house rides.

These complicated media experiences are part of a collective memory that spans four generations and influences our culture and our technology.  Sadly there has been no historical record of any indoor amusements, until now.

The 'Dark Ride Project' is an initiative that captures the world’s indoor amusements in VR, bringing attention to their history to promote and save them.

The VR experience is created from multiple passes of the ride using ultra low light cameras, which are used to create a seamless 360 video and archival material.  We also capture the fully lit ride for photogrammetry and store accelerometer data so no element of the ride is left in the dark.

There is an urgency to this research that I have seen first hand – many of the rides I have visited over the last 15 years are no more. Keansburg NJ’s Spookhouse thrilled riders since 1931 until it was destroyed by hurricane Sandy, and the famed Whacky Shack at Joyland, KS was demolished with the park in 2009.

This is the case with literally hundreds of dark rides built in the early half of last century, of those hundreds there are now only fourteen remaining from the 1960s and before.

There are some positive tales; like that of Jeremy Cruse and David Smith who bought their favourite dark ride from the demolition crew. Now the notorious 1960’s Haunted Castle Ride from the Miracle Strip Amusement park in Panama City rides again.

I have interviewed people from Alabama to Australia about these rides and the important memories that they hold for them and their communities.

From a first kiss to a first nightmare, many of us had memorable experiences on a dark ride; but unlike your favourite drive-in movie, there is no rental copy.

With the resurgence in VR the time is at hand to embrace an archive of our entertainment technology history, especially one so influential on cinema.

Ghost trains and haunted houses are part of our shared memory but with a dwindling number of real rides left, how long will that memory endure?

The online response to the project has been incredible, with enthusiasts, sentimentalists and spook fanatics all praising our efforts and eager to re-live these rides.

The Dark Ride Project will be travelling around the globe this summer conducting the first round of VR captures in Australia, the USA and UK.  Previews of the capture are being released through our website, Facebook 360 and Youtube.

A total of six rides will be captured and will be on display at the ScareLA conference in August. There is a fantastic opportunity to connect the contemporary interest with amusement parks and VR with this history.

The Dark Ride Project brings together communities of people and can re-invigorate their interest in amusement parks today and is seeking funding to complete the remaining ten ride captures and then release the experience onto a suitable platform as either segments, episodes or a full VR documentary.