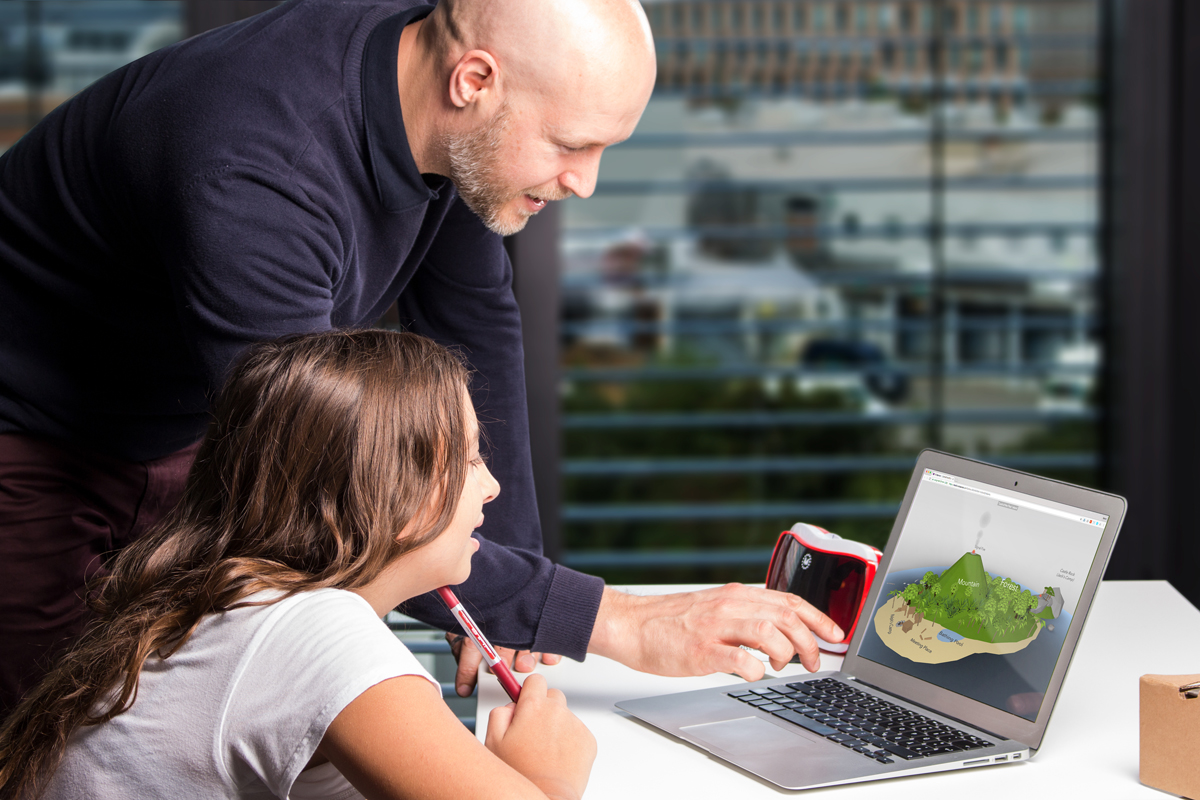 By Susanne Krause | 6th September 2016 | CoSpaces, Delightex
Susanne Krause is responsible for Public Relations at Delightex. The Munich-based startup wants to democratize VR creation by providing a free and easy platform – CoSpaces – with which anyone can build and experience their own virtual reality content. Before she made playing with VR an essential part of her job, she was working as a journalist and columnist for one of the biggest German newspapers, the Süddeutsche Zeitung.

Virtual reality is coming to the classroom. After the release of Engage last week, yet another platform is about to bring educational VR content to students.

Children can now use a headset to travel to the other end of the world, beneath the ocean’s surface or to outer space. “Some of our students have never really left the bubbles of their own town”, says Jaime Donally, presenter and creator of virtual global events.

“Virtual reality is a relatively inexpensive way to show them the world – and I mean not just on a piece of paper.”

While Donally loves all the possibilities that professional, ready-made VR content – like Google Expeditions, Engage or Nearpod offers – she is one of the teachers who don’t want to content themselves with consuming virtual reality in the classroom.

“The next step, of course, is our kids being the creators of those experiences”, she says. Now that school libraries are upgraded to Makerspaces, teachers want to show their students both sides: How to consume new media wisely – but also how to create content for it.

“Making something yourself, as in the whole Maker Movement, is very valuable. Especially for computer education, which is getting more and more important”, says Man Choi, who already lets his students build virtual reality content.

Kids can become part of stories they create

The South-Korean teacher is one of the educators who uses CoSpaces in class. The platform has a ow entry level and lets children build in virtual reality.

The content is created via drag and drop in a browser app, the creations can be viewed in virtual reality using the smartphone app. The whole process doesn’t need any special technical skills and only the most basic VR tool: a cardboard headset. Additionally, it is free.

That means a few computers, smartphones and cardboard headsets are enough to turn the classroom into a VR studio. But what kind of VR content would a class produce?

Experience shows that teachers and students are especially interested in telling stories with virtual reality. Left with no instructions, kids use the software to create everyday scenes with an odd twist or downright strange fantasy worlds. They use VR to tell stories that do not have to follow the ruleset of the everyday world they know.

A candy land, Tintin fan fiction and a world with gigantic mice and tiny green elephants – these were some of the VR stories created in a workshop for kids, conducted by the startup iMMERSiVELY.

“This was a very new experience for the kids – a totally different kind of storytelling”, says Alison Foo, one of the organisers of the workshop.

Teachers usually have more concrete plans when it comes to VR creation in the classroom. “I've already started using this with a year five to eight class, focusing on comprehension based around a story we read together”, says Angela Lee, technology integration specialist.

She lets students recreate plot lines in 3D to see if they have understood a given text.

This shows how it is not only interesting to invent but also retell stories in virtual reality. May it be a simple scene from a fairy tale or an elaborate stage design for Shakespeare’s “Richard III” – VR can make literature immersive in a whole new way.

Spicing up presentations with VR

Instead of standard presentations or posters, students can use a 3D environment to share information by, for example, creating a VR model or an immersive infographic. They could also even create a virtual exhibition with images and information panels.

This is not only an interesting challenge for the student who creates the VR presentation, but also makes it more immersive for the classmates who will explore it later.

VR exhibitions can be created to cover pretty much any subject. However, there is one especially exciting use case: Children are able to design museums with their own pieces of art.

After having digitalised the paintings and drawings, students can design individual exhibition spaces for their art and invite others to visit them.

The power of DIY

Exploring ready-made VR content and creating your own experiences has very different benefits for students.

The immersive learning content that, for example, Google or Engage provide aim to give students a realistic experience: They can explore far-away places as if they were there or look at the naturalistic replication of an organ from all angles.

They won’t bring a realistic replication of the South Pole or the digestive tract into being. However, that shouldn’t be the aim. With creating virtual reality yourself, the emphasis lies not so much on the outcome, but in the process of translating something into a whole new medium – and the possibility to step inside your own creations.