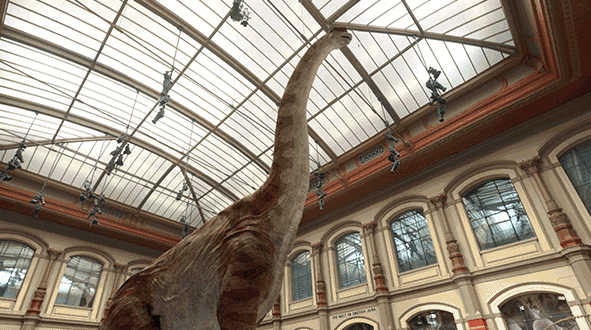 By Rachael Power | 13th September 2016 | VRTech http://www.virtualreality-news.net/
Categories: Applications,
Rachael Power is an editor at TechForge Media, writing about marketing tech, connected cars and virtual reality. She has written for a number of online and print titles including the Irish Times, Irish Examiner, accountingWEB and BusinessZone. Rachael has a passion for digital marketing, journalism, gaming and fitness, and is on Twitter at: @rachpower10.

We all know that both virtual reality and 360 video are great for exploring distant, hard-to-get-to places – but it can also be a great tool for experiencing the past.

Google has recently partnered with over 50 of the world’s top natural history institutions to bring the world of dinosaurs to life recently. As you can imagine, it’s gone down the 360 video route to highlight the experiences for Google Cardboard.

From this week, you can check out Google’s arts and culture app to explore exhibits and dinosaurs in 150 interactive stories, 300,0000 new photos and videos as well as over 30 new virtual tours.

One of the institutions it has been working with is the Natural History Museum in London, which shows off its now long-extinct 180 million-year-old Rhomaleosaurus – along with other dinosaurs – in 360 video format.

According to Amit Sood, director of the Google Cultural Institute: “We wanted to give you a glimpse of how these colossal creatures actually looked. So we worked with ecologists, paleontologists and biologists to put virtual skin and flesh on the preserved skeletons.

“From the size of the eye to the position of the snout and the bend of the neck, the texture and creases of the skin were all painstakingly recreated and verified by a team of scientists,” he wrote.

We’ll definitely be donning our headsets and exploring the 360 world of dinosaurs for an afternoon or two – but what about you?