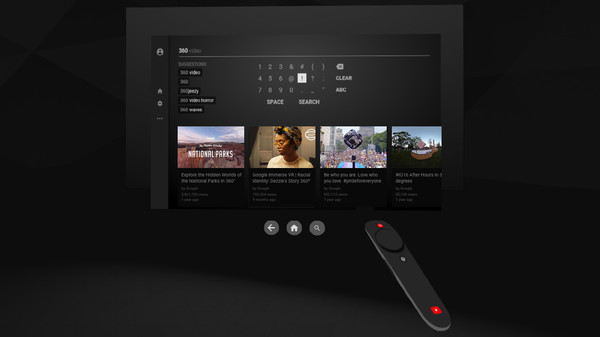 By Colm Hebblethwaite | 15th December 2017 | VR 360 https://www.virtualreality-news.net/
Colm is the editor of VR 360, with a mission to bring the most important developments in technology to both businesses and consumers.

Steam users can now download YouTube VR right now. The company has also released a trailer for the release.

Users will be able to browse and watch content from every channel or creator in VR, without being limited to 180 or 360 videos. The experience is similar to that of VR theatres, where users are presented with a floating screen insider of the virtual environment.

Google has stated that the download will remain free, introducing some interesting questions about whether the company is planning to monetize 360 adverting in some way.

YouTube VR is available on Steam in Early Access, meaning that the company will be looking to fix bugs and improve performance in the coming weeks.

Sam Byford of The Verge has reported that he experienced problems with the programme crashing instantly when it is started up. There have been numerous reports from users in Steam forums of similar issues, and a member of the dev team has said the company is looking into the issue.

Even if the problem is fixed quickly, having such a substantial issue for a wide portion of users on launch is not ideal for Google. I can be contrasted against the much more successful, and relatively bug-free, release of Google Earth on Vive.

Google has also stated that YouTube VR will be optimised for HTC Vive in Early Access, meaning that users of headsets will likely not have a great experience.