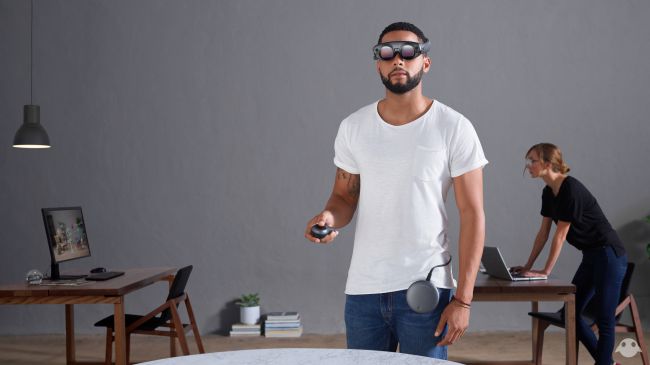 By Colm Hebblethwaite | 21st December 2017 | VR 360 https://www.virtualreality-news.net/
Colm is the editor of VR 360, with a mission to bring the most important developments in technology to both businesses and consumers.
Spread the love

After years of silence and speculation, not to mention billions of dollars in investment, Magic Leap is set to release its first product in 2018.

The company has released the first images of the hotly anticipated Magic Leap One headset, and announce that it intends to launch the product as a developer kit first. The Creator Edition will be available in early 2018.

The Magic Leap device is an AR headset that makes use of the company’s Digital Lightfield technology, which is claims seamlessly merges digital content with the real world. The headset uses Lightfield Photonics to generate light that blends with the light profile of the real-world user environment to ensure that virtual objects appear ‘in’ the environment rather than overplayed on top of it.

Rolling Stone reporter Brian Crecente was invited to try the device , and wrote:

“To see the physical world around me, and then those creations appearing not on it, as if some sort of animated sticker, but in it, was startling.”

You can see the device in Star Wars- related action here.

Not a full disclosure

The headset uses several built-in cameras and sensors to map the user’s environment, allowing virtual objects to move and react to objects such as tables and chairs without disconcertingly clipping through them.

Another interesting feature of the product is the Lightpack. This pack can clip onto a belt or backpack and, according to the company, packs as much power to a MacBook Pro and contains a dedicated graphics card. The googles are also reported to have a second, lower-powered, computer that takes care of world detection. While, the Lightpack is tethered to the googles, the product is not tied to a computer or backpack.

Magic Leap plans the headset to have a much wider range of applications than AR content. The company has stated that users will be able to watch live television, play games and potentially use it as a work tool. Users will be able to have multiple virtual screens appear in the air around them, which can then be moves and resized, that will follow them as they walk around.

The announcement did not contain any information relating to the price of the developer kit.