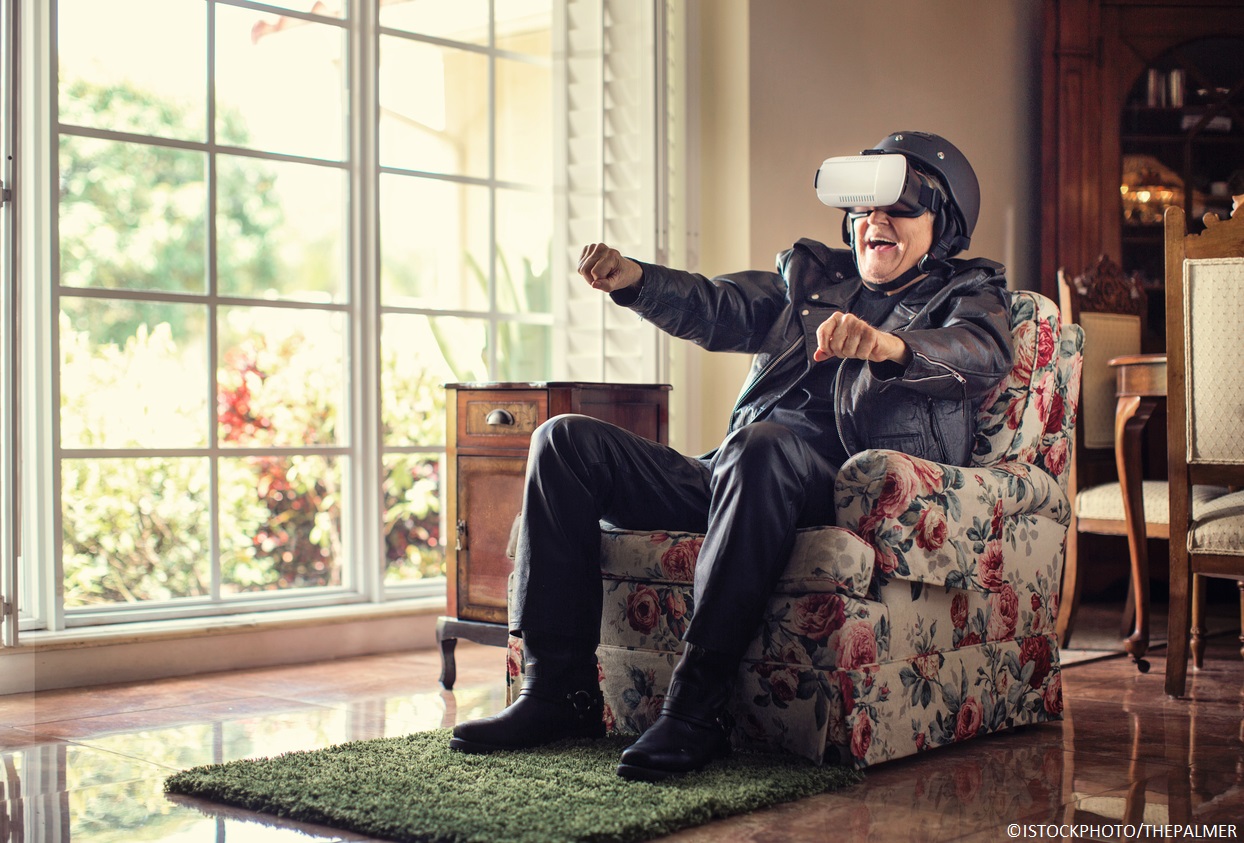 By Ryan Daws | 3rd March 2017 | TechForge Media
Editor at TechForge Media. Often sighted at global tech conferences with a coffee in one hand and laptop in the other. If it's geeky, I'm probably into it.

VR was everywhere at this year’s MWC, but the industry still has some work to do when it comes to increasing consumer appetite.

With most consumers not interested or unaware of VR; selling expensive headsets on the scale needed to reach mass adoption will be difficult. Bundling headsets with smartphones may be an option – such as Samsung with the GearVR – but delivering compelling experiences on devices up to $99 will be key to increasing consumer appetite.

“Devices that are out there and we should be trying to build experiences onto may not be the premium devices yet,” comments Jefferson Wang, Senior Partner, IBB Consulting. “If you think through that logic, it really says we’ve got an opportunity to drive immersive content, but we need to be wary of the limitations of what’s out there on the market.”

Google has made the most traction in the under $99 bracket with their Cardboard headsets which can be found at less than $10 around the world. If you had the inclination, you could even build your own. Google says it has shipped more than ten million Cardboard headsets they know of, with even more sold through other manufacturers.

“For a lot of people, that first bitesize chunk of VR may be enough to get them excited,” says Amit Singh, VP of VR, Google. “Geographies that don’t have high bandwidth and where phone quality isn’t that high, we’re deeply committed to give them that experience.”

Cardboard is a superb entry point to VR for many consumers with app downloads exceeding 160 million downloads and 30 apps having more than one million users. The platform was always designed to be more of a sample to get people interested, and now Google is now taking a real attempt to kick off the low-cost mobile VR market with their Daydream platform which offers a more comfortable headset along with a controller as standard.

“What we learned from Cardboard, we’re now applying to our more immersive platform called Daydream,” explains Singh. “While it’s early days, we’ve been very encouraged, and people love the soft materials we made it out of which are available in different colours so it fits in your home and doesn’t feel technical or geeky.”

According to IBB, the vast majority (77%) wish to consume VR content at home which shows a continued reluctance to use headsets in most public scenarios perhaps due to a perceived stigma. 24 percent would prefer to use VR in a theme park or museum-like scenario, 15 percent on a plane, 13 percent responded in none of the scenarios, 12 percent at work, and just seven percent on public transport.

Where VR content is most likely to be consumed is worth considering. In a home scenario, users have more space to manoeuvre than on public transport, for example, and may lend itself to more interactive experiences involving motion controls. The lack of enthusiasm for VR in the workplace should be taken notice of and efforts focused elsewhere. Consumers may be more receptive of mixed-reality AR experiences in public areas because it allows them to keep an eye on their surroundings.

Gaming is by far the VR content which interests consumers the most (37%) but this could be due to gamers often being early adopters of new technology. As more consumers experience how VR can be used elsewhere, this may change over time. As of today, however, gaming is where the interest for VR lies.

VR in the gaming industry will be driven further as marketing for PlayStation VR and its titles ramp up and receive competition from players such as Xbox who are expected to launch a console VR headset in collaboration with Oculus later this year.

The next category which generates interest from consumers is for travel-related experiences (20%) which allow them to visit new places, landmarks, or attractions like museums. This is followed by movies, TV, and news content (17%), then seven percent for educational use, theme park experiences, and visiting friends and family virtually.

“Last year, we did the same analysis and travel was third, now it’s moved up to second,” says Wang. “I think people are starting to see what you can do: whether it’s teleporting into another environment, having conference calls with people in other areas, or trying somewhere before you spend $5000 on a vacation package.”

Education is often touted as being an area where VR would be most beneficial so it’s somewhat of a surprise to see it rank so low. AR is often preferable in these scenarios, but several booths employed both technologies at MWC to great effect. Huawei, for example, used VR to demonstrate a self-driving car experience. AT&T, meanwhile, showed how a connected car interacts with city infrastructure from a top-down perspective using AR.

The demand for video content is also strong, with YouTube being the most used app “by far” on Cardboard, and continuing to be the most popular on Google Daydream. Well over 50 percent of consumption on these devices is YouTube. “People want that lean-back experience, they want immersive content and 360 [degree] videos,” adds Singh.

Google has witnessed over a million views of a VR series based on the NFL called “Immersed” which told stories not just about the game, but around the game with things such as matchups. During MWC, Google also launched ‘Sky VR’ for Daydream which brings a range of sporting and entertainment content from the broadcasting giant.

We’re just beginning to have access to hardware and processing resources to create high-quality VR video content without a Hollywood-size budget. This will help smaller producers create immersive content that will help consumers understand the potential benefits which VR has over standard video.

Google itself has played a role in helping make the capturing of VR content more accessible with their ‘Jump’ camera which features 16 cameras in a circular array to record 360-degree videos in a resolution equivalent to five 4K televisions. Furthermore, it handles all the rendering, processing, and stabilising. “It used to take weeks to shoot video, now it takes hours,” comments Singh on Jump, while teasing a next-generation version.

One media company, RYOT, is using both VR and AR to bring important stories to life. Anthony Graves spent 12 years in solitary confinement for a crime he did not commit and RYOT brought his story to the spotlight with a VR experience that attempts to show what spending even a small amount of time alone in a cell with little-to-no access to natural light is like. It’s an insightful story and worth checking out to gain some understanding of the controversial practice.

RYOT focuses a lot of its efforts on difficult issues which need to have their awareness raised, but it’s not all they do. As an example of the company’s use of AR, RYOT brought the Louvre art gallery to kids in Los Angeles which you can see in the heartwarming video below:

Jaunt is another company focused on building VR experiences and firmly believe it’s mobile VR that will pave the way. “We don’t see enormous volumes of high-end headsets with consumers, most of our users are on mobile,” explains Arthur van Hoff, CTO & Founder of Jaunt. “VR technology is based on mobile. If you open an [Oculus] DK1 it’s got a Samsung S3 inside, literally, and the sensors are from the mobile world, the screens… we believe mobile VR is where the action is today.”

Hoff warns you cannot just put a full $100 million game onto a phone, you need to find content which is appropriate for mobile VR. Cinematic video works, and where previously VR has been driven primarily by manufacturers, Hoff notes it’s now being driven by brands. This year, every big brand or advertising agency has a dedicated VR budget for perhaps the first time.

While it’s more immersive with a headset – even a basic one like Cardboard – the extra depth of VR content is available in just a browser or app such as Facebook which now allows you to scroll around 360-degree video.

Jaunt also offers a VR production kit similar to Google, but the company believes its experience has allowed them to make an even more complete end-to-end VR production solution.

“There’s a lot to learn about doing high-end productions in VR and we’ve been doing this for a lot of years now,” says Hoff. “We started where Google is today with GoPros and a 3D printed rig, but we quickly found out in a professional world those cameras are not reliable enough and the quality is not high enough.”

“We’ve built a custom camera specifically for capturing cinematic VR with the Jaunt One, and it’s currently the highest quality camera for VR that’s on the market. It’s been tested in the Antarctic, the Sahara, on planes, drones… it’s the workhorse that can be used every day.”

Beyond the difficulty of capturing VR content, it must then be processed and Jaunt has tools for creators to achieve this using software they’re familiar with. Then it needs to be distributed, and this can also be complex because to cater it for various devices and networks you need to be able to scale the bandwidth of the VR content.

A high frame-rate VR experience can go up to 60 – 70 mbit/s, which is going to be ok for 5G connections, but that’s going to be a while yet. You could download and play, but most people want to stream instantly and not stare at a downloading bar waiting for it to finish before they can experience their content.

Mobile operators had their first taste of the demand for altered reality when AR hit Pokemon Go launched and had masses of people learning to experience content on their smartphone in a new way. While it showed the potential scale of adoption for the right content, each user only uses a relatively small amount of data. If full streaming VR content launched on the scale of Pokemon Go today, mobile operators simply wouldn’t cope.

“Part of Verizon Labs is to set the protocols, the streaming, and the distribution strategy of how AR and VR can reach everyone,” says Raheel Khalid, Chief Engineer of VR, Verizon. “We build technology which allows you to reach all your customers regardless of the base and we ensure it’s zero load time, instant, and fast.”

Verizon has solved the speed issue with a brand new streaming protocol where you can package all the experiences in an adaptive way. To demonstrate this, Verizon built a game it calls ‘Alpine Village’ which instantly streams a VR game complete with multiplayer, voice chat, and dynamic ads on billboards all under 4 mbit/s.

Khalid believes that where media has been traditionally flat, we now have to use VR to change how we tell our stories in a more immersive way. Once consumers are used to being in a VR experience to see through a person’s eyes or the latest developments in this new way, they’re not going to want to go back.

What are your thoughts on improving the consumer appetite for VR? Let us know in the comments.