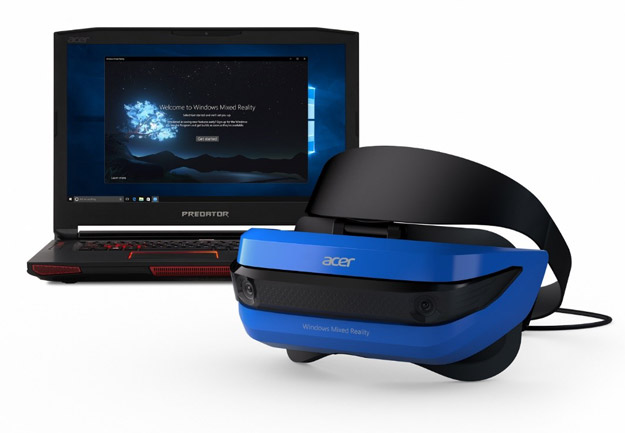 By Colm Hebblethwaite | 5th September 2017 | VR 360 https://www.virtualreality-news.net/
Colm is the editor of VR 360, with a mission to bring the most important developments in technology to both businesses and consumers.

Acer’s chairman Jason Chen has estimated that Micorsoft’s mixed reality ecosystem will come out on top of the VR pile in the next few years.

Chen thinks that the mixed reality market will reach 10 million units sold a year in the next half a decade, making it easily the most popular VR platform.

The company’s awesomely titled Mixed Reality Head-Mounted Display (HMD) is available for pre-order now. Like other mixed reality headsets, the device is not a full-on VR gaming platform, but it will likely come with gaming features like SteamVR and Halo VR.

This year at IFA 2017, a number of other companies put their hat into the mixed reality headset ring, including the Lenovo explorer, the Asus Windows Mixed Reality Headset and the Dell Visor.

The Acer Holo360 camera, powered by the Qualcomm Connected Camera Platform, gives users the power to capture, view, edit and share with any device that runs on Android 7.1. Users can watch back the 4K video footage with a VR headset.

The Vision360, on the other hand, is a cloud-connected driving experience that uses 360 video to ensure that every angle around a vehicle is recorded at all times. If the car is subsequently involved in a collision, the device records the time and GPS and stores it on the cloud. It is also possible to record trips and relieve them in VR.