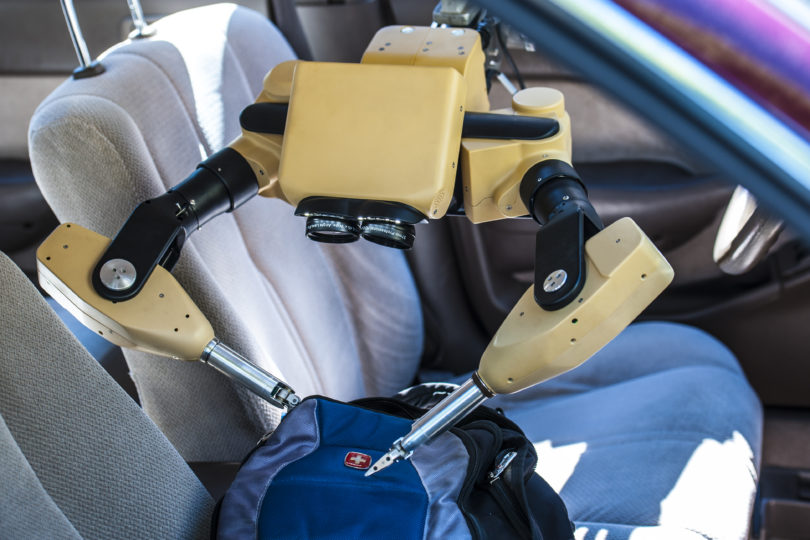 By Colm Hebblethwaite | 14th September 2017 | VR 360 https://www.virtualreality-news.net/
Colm is the editor of VR 360, with a mission to bring the most important developments in technology to both businesses and consumers.

The narrative that robots are coming for all of our jobs often fails to mention one important fact: that there some jobs that no human really wants to be doing anyway.

One of those jobs being disarming bombs and explosives.

A robot called Taurus Dexterous, created by SRI International, has begun to remove humans from having to physically disarm and dispose of bombs, and therefore face a very real threat to their lives. While bomb disposal robots have been in use for a while now, Taurus is the first to utilise VR.

The human operator that is controlling the use an Oculus VR headset and Occulus Touch controllers, to see through Taurus’ eyes and operate its two independently controlled manipulators.

Previously, the operator would control the robot using a monitor and static controls to control the movement of the arms and grasping mechanisms.

The user’s view point through the headset also provides a heads-up display with virtual buttons that can be activated using the Oculus Touch controllers.

You can watch a video of the Taurus Dexterous in action here.

In an interview with WIRED, SRI’s associate director of R&D Mark Baybutt details how the VR system that underpins Taurus is also capable of providing haptic feedback to the user via the controllers:

“If you need to actually feel either the static forces that it’s pushing on, on a wall or the world, we can do that.”

The only drawback of the VR system is that headsets are not currently the ideal way to view the robot’s high-resolution recordings. The image clarity of the first generation of consumer headsets do not have sufficient capability to capture the full vide quality, although the enhanced usability of the system is the real selling point.

SRI hope that the incoming generations of headsets will correct this problem and will allow the system to have a field upgrade.

The company does have plans to develop their system for headsets other than the Oculus in the future.