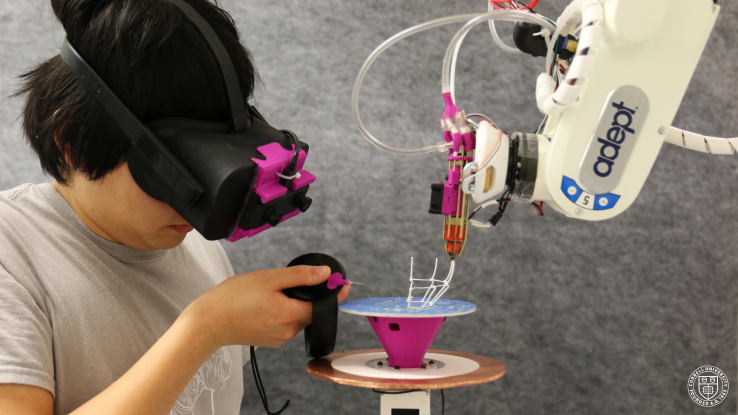 By Colm Hebblethwaite | 20th February 2018 | VR 360 https://www.virtualreality-news.net/
Colm is the editor of VR 360, with a mission to bring the most important developments in technology to both businesses and consumers.

A joint project from MIT and Cornell is looking to change the prototyping game by combining AR with robotic modelling and 3D printing.

The Robotic Modelling Assistant (RoMA) allows users wearing an AR headset and using two handheld controllers to build 3D models with a computer programme. A robotic arm gets to work building a skeletal model using a 3D printer mounted on its hand.

Project leader Huaishu Peng described the benefits of the project as allowing users to “integrate real-world constraints into a design rapidly, allowing them to create well-proportioned tangible artefacts”.

“Users can even directly design on and around an existing object, and extending the artefact by in-situ fabrication,” said Peng.

You can watch a video of the process here.

The RoMA system could have wide-ranging effects on a range of industries. With the robotic arm printing the design in the same time and place as it is being digitally designed, the creator gains tangible feedback much earlier in the process.

It will also be possible for the designer to directly design and print on to an existing physical object, allowing them to adjust their designs with a greater degree of accuracy.

The system uses an interactive technique that allows the designer and the robotic arm to work together in an efficient way. For example, if the designer is working on the front of the digital model, the robotic arm will print on the back while the model changes are re-computed in real-time.

The team hope that the combination of AR and 3D printing could be laying the foundation for intelligent, robotic design assistants, particularly in areas such as furniture design.