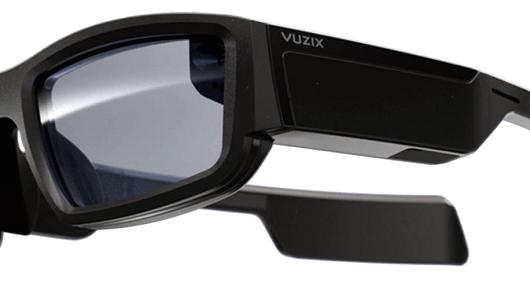 By Colm Hebblethwaite | 10th January 2018 | VR 360 https://www.virtualreality-news.net/
Categories: AR,
Colm is the editor of VR 360, with a mission to bring the most important developments in technology to both businesses and consumers.

The Vuzix Blade AR glasses look like it could be the breakthrough in the AR devices space that the industry has been looking for since the failure of Google Glass.

Vuzix has been showcasing the Alexa-enabled glasses at CES, and claims that they will be delivering a developer version in the coming months.

Through its partnership with Amazon means that the device is the first pair of AR glasses to be integrated with the ecommerce giant’s voice-based digital assistant. The price is currently set at $1,000 but the company will be looking to bring this down in time.

And, perhaps most importantly, the device actually looks like a pair of glasses, which should make consumers more willing to don a pair while doing their weekly food shop.

“What differentiates the Vuzix Blade from all existing or proposed AR smart glasses and mixed reality head mounted computers, is that it’s built for today’s user,” said Paul Travers, President and CEO of Vuzix.

“With a fashionable form factor, a brilliant display, and a broad range of features that allow the user to experience AR at work or play, the Vuzix Blade is the first pair of smart glasses that people would actually enjoy wearing.”

You can watch the product video here.

The Vuzix Blade offers users a wide range of features, including directions, menus, weather, stocks, video conferencing, news updates, social media feeds and bio-metrics. The device is compatible with both iOS and Android smartphones, and through an app user will be able to use their favourite apps and manage notifications with their phones in their pockets.

Users will also be able capture images and videos using an 8 Megapixel camera with 1080p video.

The user controls the headset with a touchpad located on the side of the device, and with voice control. The device also has head motion trackers and haptic vibration alerts that can be used for notifications.

“It is the only AR-enabled pair of smart glasses that work right out of the box, without the need for programming – just connect to your device, customize your settings and go,” says Travers.

“Either at work or at leisure, the Vuzix Blade Smart Glasses are the most compact and sleek AR-enabled smart glasses available today.”