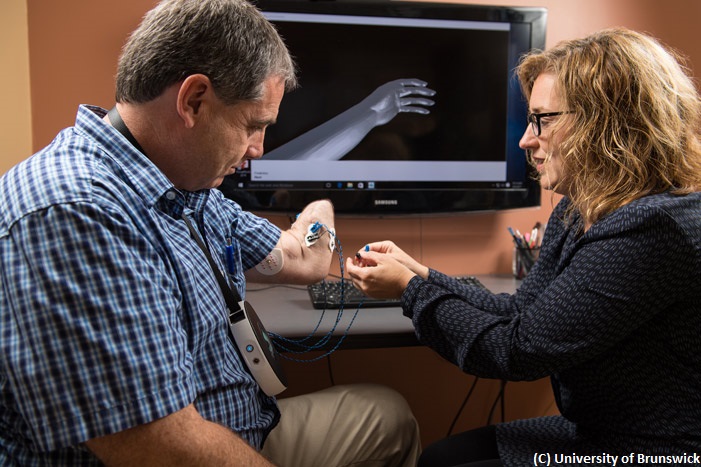 By Colm Hebblethwaite | 2nd March 2018 | VR 360 https://www.virtualreality-news.net/
Colm is the editor of VR 360, with a mission to bring the most important developments in technology to both businesses and consumers.

Phantom pain is a strange phenomena whereby someone who has recently lost a limb continues to feel pain that seems to be coming from the missing limb itself. The condition can often compound the anguish that can come when a person loses part of their body.

As well as trying to understand why phantom pain occurs, scientists have been trying to find an effective way to treat the condition. Researchers at the University of Brunswick’s Institute of Biomedical Engineering are studying whether VR can help patients deal with the pain.

Some estimates put the number of amputees that suffer from phantom pain as high as 70%. The sensations felt can range anywhere from a slight itchy feeling to debilitating pain that can last for hours. It can make it difficult for amputees to sleep, wear prosthetic limbs and subsequently affect their day to day life.

There is some medication that has proved effective at helping with the pain, but the Brunswick researchers hope that using VR could reduce the need for pills and potions.

“This is a new technique that in a limited field trial showed great promise – where almost everyone had reduced levels of phantom pain,” says institute associate director Dr. Jon Sensinger. “It’s an exciting first step, though time will tell if it’s truly having an impact and if it’s any better than existing treatments.”

The VR treatment being trialled builds on the foundation of mirror therapy, which uses mirrors to create the impression from the patients point of view that the limb is still intact. This can, over time, fool the patient's brain into quieting the signals that are causing the pain.

“Mirror therapy is the best thing we’ve got but it’s not working that well,” says Dr. Sensinger

The VR treatment takes the concept further by leveraging the truly immersive nature of VR to present the patient with a virtual version of their fully intact limb. Using sensors the team can create an avatar image for the missing limb that reacts to the movement of the patient.

The team are currently working with the first  patients in the study to look at how effective this method could be.

“The preliminary evidence suggests that this is a successful method. Whether it’s more successful than mirror therapy remains to be seen. But it looks promising,” says Dr. Sensinger. “We think we understand what we’re exercising in your brain and why that would make an impact in producing pain.”