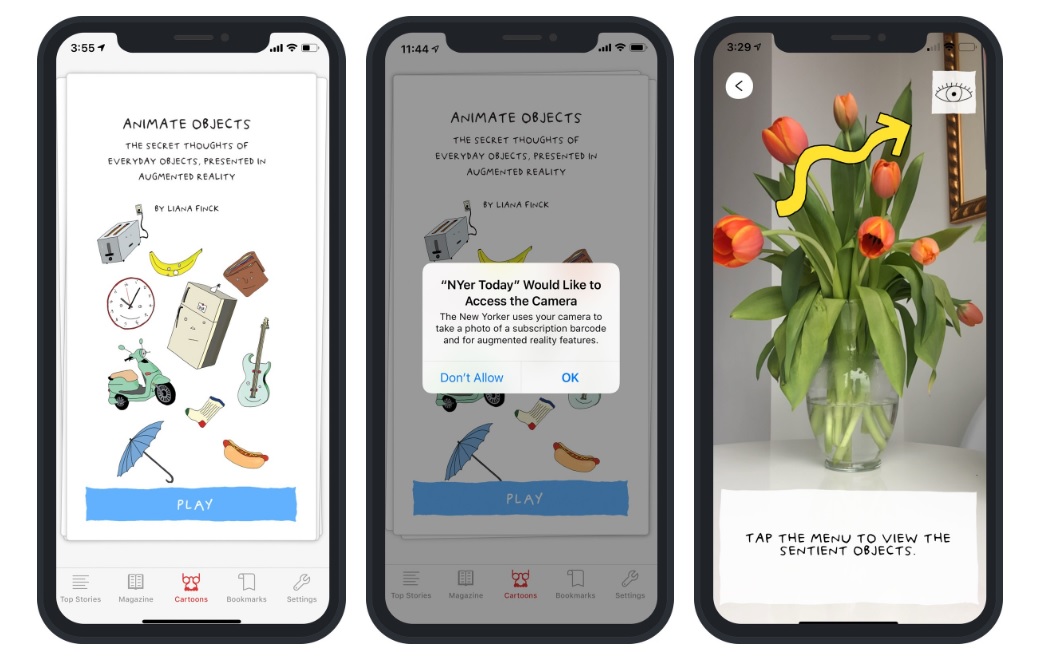 By James Bourne | 26th November 2019 | TechForge Media http://www.cloudcomputing-news.net/
Categories: AR, Brands,
James is editor in chief of TechForge Media, with a passion for how technologies influence business and several Mobile World Congress events under his belt. James has interviewed a variety of leading figures in his career, from former Mafia boss Michael Franzese, to Steve Wozniak, and Jean Michel Jarre. James can be found tweeting at @James_T_Bourne.

The New Yorker has launched an augmented reality-based (AR) series of cartoons in addition to its previous campaigns around the technology.

The offering, called ‘Animate Objects’ and part of the revamped New Yorker Today app, allows users to point their smartphones at various everyday items and see an animation in return from New Yorker cartoonist Liana Finck.

The product utilises Apple’s ARkit to provide the object detection required to both recognise items in a user’s environment, as well as pin the animation across the environment. Consequently, the app is i-Specific, with iOS12 the minimum required operating system and iPhone 6S or fifth-generation iPad the base level hardware.

“Finck’s signature style and inimitable wit are embedded throughout the experience – from the handwritten interface to the imagined possibilities of the objects around you,” the company notes.

This is not the first initiative The New Yorker has put together with regards to AR. In 2016, artist Christoph Niemann contributed what was seen as the first augmented reality front cover story, whereby users could move from the paper cover of a person getting on a subway train and explore an entire cityscape. “The idea of an augmented or virtual reality is inherent in any drawing – it’s almost the definition of a drawing,” said Niemann at the time.

In terms of wider projects, various publishers are looking at the possibilities AR can bring. As Digiday reported at the start of this year, the USA Today team launched four ideas in 2018, from a standalone app focused on spacecraft, to a separate AR experience promoting a podcast. Ray Soto, director of emerging technology at USA Today, noted at the time the company should go beyond being ‘gatekeepers’ of interactive AR to helping the newsroom create content at scale.